How Morale Changes as a Startup Grows

When we think about startup cultures, we imagine ping pong tables, kegerators, and Nerf guns. More importantly, we envision an esprit de corps that drives employees to happily burn the midnight oil to build the next big thing.

However, this startup cultural utopia invariably hits a rough patch for about 70% of startups in years three to four, regardless of how happy the team was before.  We call this the “cultural chasm.”

At the same time, companies that cross the cultural chasm see a marked rebound in their culture starting in years five and six, although not returning to the “honeymoon” of the startup’s early days. 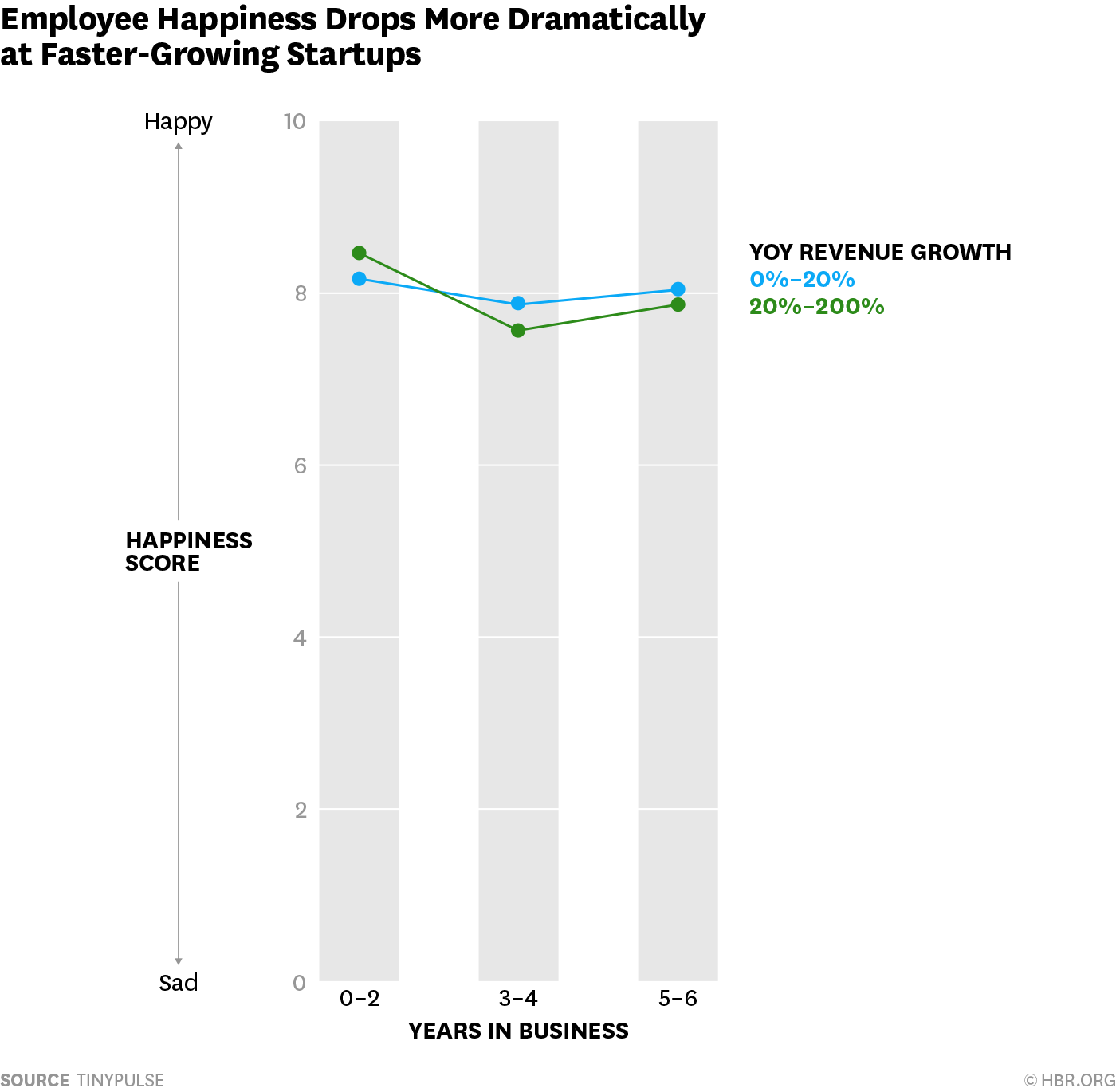 After researching over 100 early stage ventures, we began to understand why startups hit a cultural chasm and how to navigate it.

In addition to examining surveys of employee happiness, our research included the annual revenue growth rate of companies. Two distinct sets emerged. One cohort reports 0%–20% year-over-year annual revenue growth rates; the second is a faster-growing group experiencing 20%–200% year-over-year growth. The data shows that the faster-growing group usually has a higher cultural starting point in years 0 to 2, but their chasm is much deeper in years 3 to 4 than the slower-growing cohort.

This could be due to the fact that the founders in the faster-growing segment were so busy at the beginning with rapid growth that they simply did not have time to invest in their company’s cultural infrastructure. Then when issues start rearing their heads in year three or four, these problems are exacerbated by the absence of a cultural foundation. It’s easy to run to the urgent at the expense of the important, but founders of all companies need to focus on their culture, especially at the fastest-growing firms (because the chasm drops so deeply for them).

One of the costs of a weak or negative culture is voluntary attrition, or employees choosing leave. By investing in culture early on, one would expect that voluntary attrition would be lower, and our research corroborates that. Founders who rate the importance of culture lower than a 10 on a 10-point scale are 70% more likely to have higher employee turnover rates compared to founders that rank the importance of culture a 10.

Unplanned attrition is extremely challenging for any business, but it’s especially tough for a startup because young, small companies lack the infrastructure and talent redundancies of larger companies. For example, if a CRO or CTO leaves a young company, it can cripple the organization.  But founders can minimize the chances of that occurring by prioritizing culture from the startup’s earliest days.

For founders who are committed to focusing on their culture early on, where should they start? We found that one significant driver of employee happiness is the employee’s rating of management transparency, showing a stronger correlation with company culture then factors like benefits or work-life balance.

What really matters here is the employee’s perception of how transparent management is. For example, one of our clients in the UK scored lower than average on transparency when they anonymously polled their employees. While executives at this company thought they were extremely transparent, employees did not agree. So the leaders decided to use their next “all hands” meeting to respond to anonymous AMA (Ask Me Anything) questions, and committed to addressing every point. This included tough questions that made them sweat a little: for example, someone asked what was the top compensation amount for a certain role. Without revealing the person in that role’s identity (which could have been a privacy violation), the founders shared the amount and how that person had achieved their extraordinary salary and bonus.

Afterward, management re-asked the staff to rate the company’s transparency. This time, the firm ranked in the top quartile of all companies and handily beat our benchmark.

Never take for granted that perception and reality are in sync; management always has to be pushing the bar on how to be more transparent. The silver lining is that transparency is virtually free.

We also discovered, not surprisingly, that recognition improves culture and employee engagement. However, the caveat is that this is not driven only by manager-to-subordinate kudos. It’s also driven by the praise peers give to each other, both to teammates and across the company.

In fact, in a co-authored research report with Microsoft, we tracked how employees gave and received recognition. They uncovered that employees who were prominent hubs of giving and receiving kudos from both inside and outside of their workgroup outperformed their colleagues. In addition, the cheers that were given were all devoid of any monetary compensation, which just underscores how effective an easy-to-use recognition program can be in raising employee engagement.

Many would argue that culture is difficult to quantify. We have found just the opposite. By simply giving employees the opportunity to respond to an anonymous survey regarding how they’re feeling about their company’s culture, management will be able to measure how well they are performing holistically by manager, by office, by function, and so on.

In the chart below, one can see this particular organization’s happiness trend is around the overall benchmark and industry average. However, the sales function’s happiness is markedly lower. Alarmingly, it dips as low as 5; that rate is not sustainable, because employees will voluntarily leave because of the poor cultural environment. 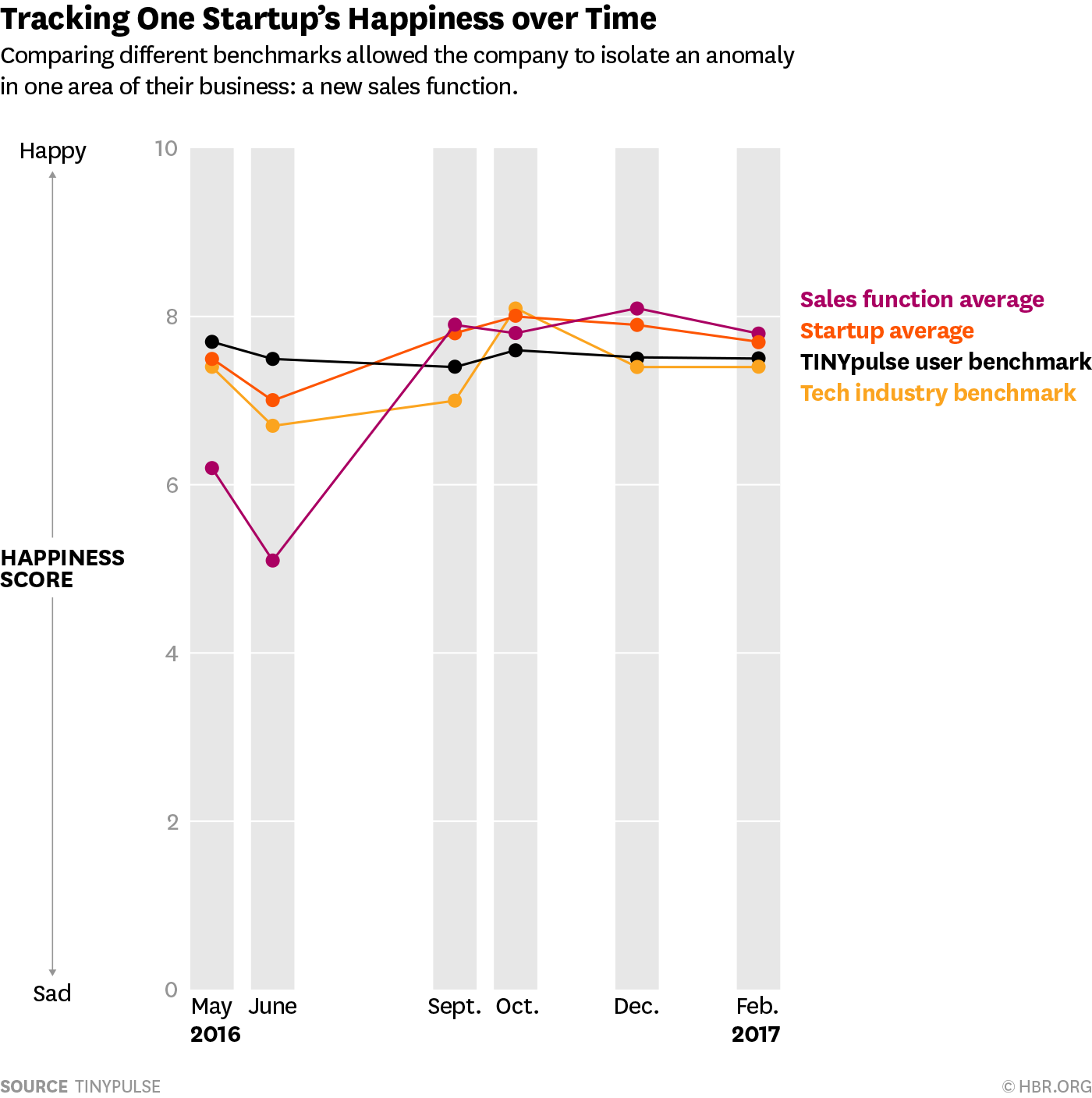 As a result, the sales leadership devised a proactive plan to reverse this dangerous trend. Some of their tactics included addressing employee feedback head-on, creating a program of formal career paths, increasing levels of recognition, and over-communicating expectations and goals. The data show that in September, there was a huge rebound that sustains throughout the rest of the year. In fact, the sales function average ends up higher than the entire organization — quite a feat. But without measuring to monitor how effective management’s changes were, they would not have been able to see the dire straits and rapid improvement.

As Geoffrey Moore pointed out in his groundbreaking book, Crossing the Chasm, companies need to market to one segment of customers at a time, starting with the early adopters before leveraging that segment to launch into the next.

We see similarities in startup culture. Founders can cherish the culture that they have in the honeymoon period, but must also understand that the culture will have to adapt as the firm grows – and so will the “early-adopter” employees as the next set of employees are added. With growth, companies have to attract more specialists than generalists and incorporate more processes, instead of making decisions informally during happy hour. Founders should set expectations with their early employees that these changes are a natural part of the firm’s success.

By tailoring their message differently for the early adopters who cherished the honeymoon period and for the next group of employees, founders and the companies they lead will be able to navigate the chasm more adeptly. Regardless of how fast the company is growing, the founders will not be able to outrun the chasm. Instead, they should focus on culture during the company’s earliest days, and pay careful attention to transparency, recognition, and monitoring their progress. This is the best way to position the company to rebound higher and quicker out of the cultural chasm.

David Niu is the CEO of TINYpulse.

Mark Roberge is the chief revenue officer of HubSpot, a Boston-based inbound marketing firm and Senior Lecturer at Harvard Business School. This article is adapted from his book, The Sales Acceleration Formula (2015), with permission of its publisher, Wiley.